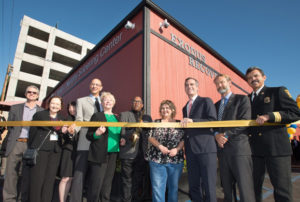 Supervisor Mark Ridley-Thomas celebrated the grand opening of the Dr. David L. Murphy Sobering Center in Skid Row, the first facility of its kind in Los Angeles County, which will begin accepting patients on Januart 2, 2017 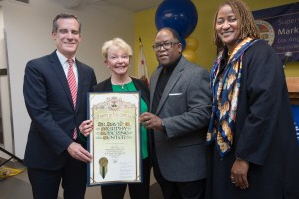 “This Sobering Center will help those struggling with alcoholism without criminalizing them or having them languish in hospital waiting rooms,” he said during the ceremony. “The staff here will help them sober up and link them to interventions that break the destructive cycle of streets, jails, and hospitals.”

Located at 640 S. Maple Street in downtown Los Angeles, the sobering center will be open 24 hours a day, with the capacity to house and stabilize about 50 people at any given time. It will serve predominantly homeless intoxicated individuals who might otherwise be picked up by law enforcement for petty crimes and/or those who might otherwise be transported by first responders to a hospital emergency room for inebriation.

“This is more than a center. This is a new way of life,” said Los Angeles Mayor Eric Garcetti at the grand opening. “Yes it will save money. But sometimes in government you do things because they are the right thing to do.” 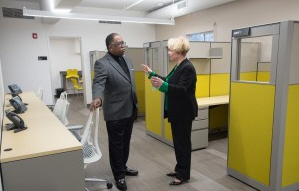 The sobering center is expected to accommodate about 8,000 visits a year by roughly 2,000 individuals. Once they have sobered up, they would be linked to substance abuse treatments, housing and other services. The County partnered with Exodus Recovery Inc. to provide mental health and substance abuse disorder services on site.

“I truly believe that the Sobering Center can change lives because they can get the help they need in order to change their lives like I am doing now, with the help of Exodus,” said Ida Jimenez, who struggled with alcoholism and drug addiction while homeless on Skid Row.

‘“I now deal with life on life’s terms and now have housing, thanks to people who care, like those at Exodus and at the Sobering Center,” she said at the press conference. “The people out here (on Skid Row) are not bad people, they are just stuck not knowing what to do. With the help of the Sobering Center, they can get sober and get the help they desperately need.” 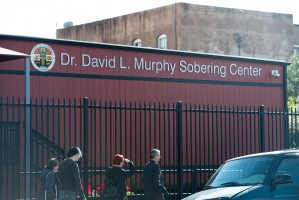 In the past, the Los Angeles Fire Department transported severely intoxicated individuals from Skid Row to the LAC+USC Medical Center, then watched over them until hospital staff could admit them, a process that could take several hours. During that waiting period, those firefighters and paramedics were unable to respond to other calls.

Besides tying up scarce public safety and medical resources at great cost to taxpayers, this does not provide lasting intervention for chronic alcoholics.

The 9,500-sq. ft. sobering center, created on a motion by Supervisor Ridley-Thomas and Hilda Solis, is named after the late founder of Exodus Recovery, Dr. David L. Murphy, who dedicated his life to helping the sickest, most marginalized and disadvantaged members of society.